With its source in the Alps and its mouth close to the Rhine falls, the Thur once was a dynamic braided river flowing through the Swiss Plateau. However, to gain arable land and decrease the impacts of floods, most parts of the river were constrained in a straight, unique channel and surrounded by high levees at the end of the 19th century. Since this time, human perception changed and we now understand that human constructions alone cannot prevent the society from floods impacts. Today, in Switzerland a strong political willingness exists to increase the space available for rivers and to rejuvenate their wilderness, with the hope to improve their protecting role against floods and their ecological state at the same time. In 2002, the rehabilitation of the Thur was one of the prominent restoration programmes in Switzerland. Several research projects used this opportunity as a large-scale experiment to increase the understanding about river functioning, e.g. the Rhone-Thur project (Eawag, WSL, ETHZ, EPFL, 2005) and the RECORD project (Schirmer et al. 2014). More than 10 years later it is time to evaluate the mid-term ecological effects of this large restoration project, so it became one of REFORM’s 20 case studies (see figure 1). 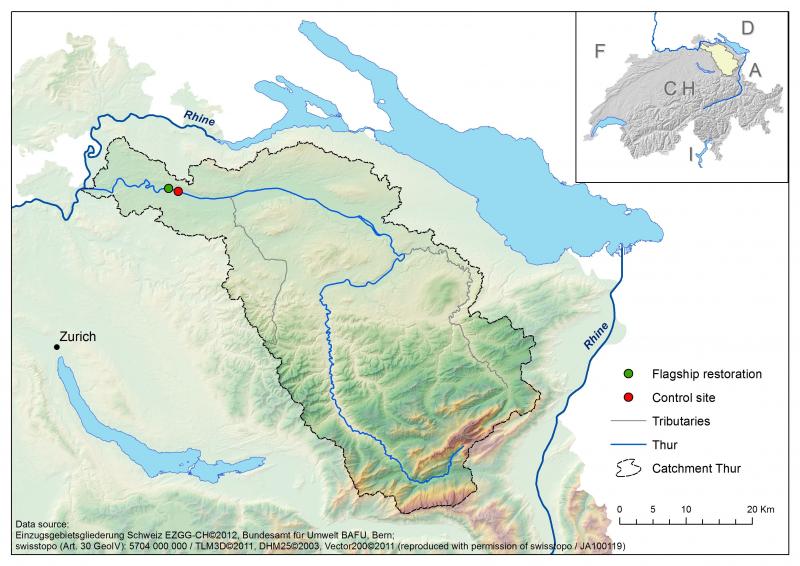 Figure 1: The Thur river is situated in the north east of Switzerland. It is a lowland river of 130 km with a 1730 km2 catchment area, and discharges into the Rhine river. It is a river free of dams and artificial reservoirs, showing water level fluctuations close to unregulated alpine rivers. This river has been regulated to serve agricultural and flood protection. Recently in the downstream part a restoration programme was implemented to rehabilitate the river over a distance of 2km (see green dot on the figure).

Before river engineering in 1890, the river braided, gravel bars were frequent, islands were present, natural alluvial forest accompanied the river. The complexity and heterogeneity of the habitats were maintained by the natural dynamics of the river itself. Its regulation created a monotonous channel surrounded by high levees and accompanied by embankments which fixed the river. New agricultural land was gained behind the levees for crop production, and between the levees and the embankments for grazing. At the same time, villages and cities were better protected from flood events during which discharge can raise to 1130 m3/sec (in 1999), far from the mean annual flow of 47 m3/sec. The stabilisation of the river bed also permitted to extract drinking water filtrated in the sediment. These human interventions had direct consequences on the hydromorphological conditions, the ecosystem functioning, and its biodiversity. Gravel bars disappeared, secondary channels terrestrialised, characteristic riverine species became rare, floodplain related species disappeared and the complexity of the system was largely reduced (see figure 2). 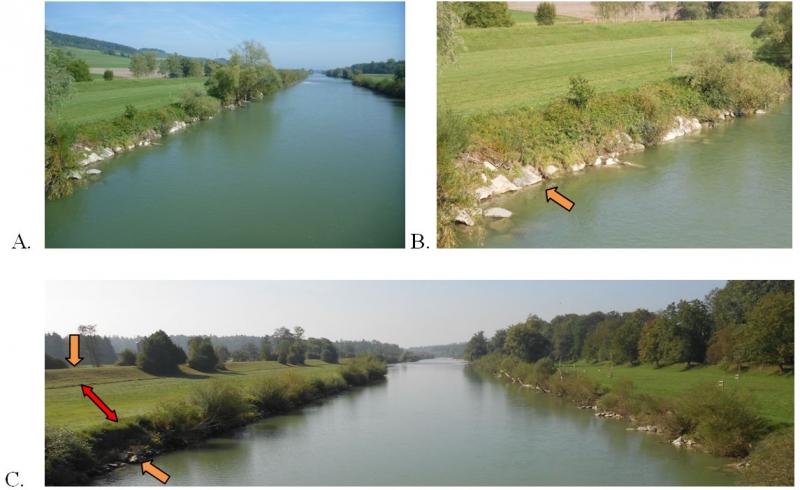 In 2002, a 1,5km section of the river and its floodplain was intensively restored. The river was widened on one side of the main river channel. Embankments along the right side of the river were removed to provide more space to the river in an area where levees were absent already before restoration (see figure 3). Additional artificial structures were added to enhance the ability of the river to braid. The dynamic processes were expected to return, with natural patterns of erosion and deposition, better connection between the main river channel and the floodplain, and recreation of secondary channels. Overall, an increase of instream and terrestrial habitats diversity was expected, leading to an increase in biotic richness and diversity, both in the river and on the banks. 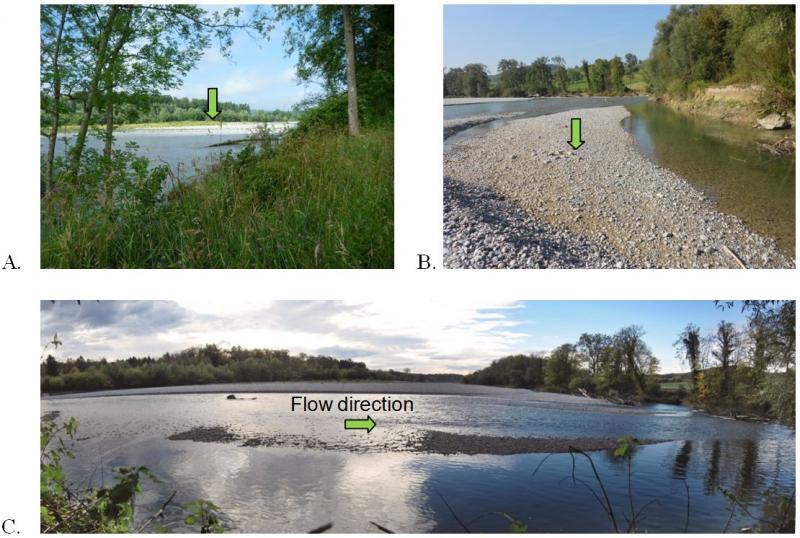 Figure 3: Overview case study site A. Recreated gravel bar on the left side of the river (green arrow), and presence of wood within the main river channel. B. Part of the restored site with the main river channel on the left of the photo, a stagnant water body and alluvial forest on the right with gravel bars between (green arrow). C. Downstream view from the middle part of the restored site (photos: A. Paillex and H. Mottaz, Eawag).

Measuring restoration success - What comes next?

As a result from river restoration, we can observe that gravel bars were recreated, secondary channels appeared, and zones of erosion and deposition now co-exist at the scale of the restored reach. A positive effect of this enhanced naturalness is an increased number of people visiting the river, especially on sunny days. This is supported by an easier access to the river and more opportunities for recreational activities. Less visible, but measurable with appropriate methods, are the biological improvements in the restored reach compared to regulated stretches. The richness in benthic invertebrates, fish, ground beetles, aquatic vegetation and floodplain vegetation has increased in the restored section (see table 1). According to a valuation of richness and of threatened and invasive species, the improvement was important for fish and ground beetles, intermediate for floodplain vegetation, and less significant for benthic invertebrates and aquatic plants. A positive effect is that threatened species (e.g. the fish Chondrostomas nasus) took advantage of this restoration project, while a negative side effect is the occurrence of an invasive aquatic plant in the restored site (i.e. Elodea nuttallii). A combined valuation of biological and morphological conditions indicates an overall positive effect of restoration on the ecological state of the river.

However, there is still a lot to do to sustain this improvement for the long term. Today, we may have to prevent invasive species from colonising the recovered habitats, and improve the water quality to increase the biological success. Finally, it is important to recall that this restored part is only 1.5 km long while the majority of the remaining 130 km of the river are still totally embanked.

Table 1:Number of taxa observed in a degraded and a restored reach of the Thur river.

You are also welcome to discover more about river restoration case studies through the REFORM Wiki.